COMPETITION DYNAMICS' PURPOSE
To run world-class, cutting-edge competitive practical shooting events with an unmatched level of professionalism and operational excellence. We bring new practical and field competition concepts to reality. Our staff has a proven track record of running challenging, safe, and fair 3-Gun, multi-gun, and long-range matches. We have been involved in administering many of the most influential field matches of the last decade and have redefined what field challenges can be applied to a competition format. We have the expertise and experience to run world-class practical shooting events.
OVERVIEW

Competition Dynamics runs world-class, cutting-edge competitive practical shooting events with an unmatched level of professionalism and operational excellence. Our staff runs more competitors through practical field shooting events with more stages than other. We bring new practical and field competition concepts to reality. Our staff has a proven track record of running challenging, safe, and fair 3-Gun, multi-gun, and long-range matches. We have been involved in administering many of the most influential field matches of the last decade and have redefined what field challenges can be applied to a competition format. We have the expertise and experience to run world-class practical shooting events. As an organization our staff and consultants have extensive experience in practical field shooting in military, law enforcement, and civil applications.

Practical and field style shooting encompasses virtually all aspects of the real application of firearms. Rifles and shooters are tested to their ballistic and physical limits using natural terrain and typical man-made structures to define the shooting problems. This type of wide-open challenge appeals to shooters who want to push the limits of what is possible, in both technique and equipment.

Competitors in our Sniper Adventure Challenge take the physical, mental, and endurance requirements to world-class levels and exhibit athletic and mental performance that few others dare to attempt or hope to achieve.

Our competitors are trendsetters and thought leaders in their communities. For every competitor that shows up at a Competition Dynamics match to test himself or herself, there are a hundred, sometimes thousands, back at the local range, gym, dojo, or blog followers who keep up to date with their equipment and results, and wish they could be out there doing the same thing. The equipment and training that our competitors use and recommend is frequently mimicked and sought after by other shooters. We also have military and law-enforcement sniper instructors, who take ideas and equipment back to their training units and expose it to a wide audience.*

Zak Smith is a competition shooter who has pushed the state of the art in practical long-range rifle shooting. He started competing in 3-Gun in 2003 and long-range in 2004 and quickly distinguished himself with top finishes at major matches. Using his scientific and engineering background, he has pushed the envelope in practical shooting, especially long-range practical shooting. Much of this information has been published in articles in print and online media. He was the first author to regularly use the term "Practical Long-Range Rifle Shooting" to describe the spectrum of solving field problems with a rifle. Zak, along with Ray and Shane, founded Thunder Beast Arms Corporation (TBAC) in 2007. 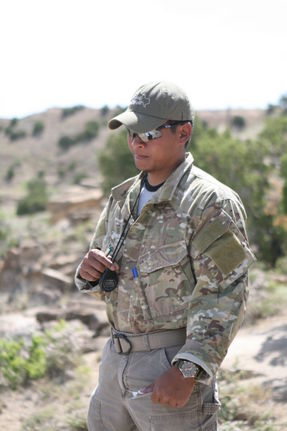 Jimmy Holdsworth is an exceptional shooter with a lot of natural talent. He started competing in 3-Gun in 1999 and quickly distinguished himself as a top-level national shooter. He leveraged these skills into match administration and has been involved in administering many of the most influential 3-Gun and multi-gun matches of the last decade, notably with the Rocky Mountain 3-Gun Nationals, SOF (2001), US Marshalls Posse match, and the IBPO/CPPA LEO 3-Gun match

Holdsworth has competed in 3Gun matches since 1999, with multiple Top-10 finishes at the CMMG Midwest 3Gun Championship, TV3G, ITRC, and SMM3G, and Top-50 at SOF and WC3G '02-'03. Other major matches include the TACPRO Sniper Tournament and SP Sniper Challenge. Match/division wins include "Open" class at TV3G '04, two class wins at USPSA 3Gun Nationals.

Other Training and Experience

Collin Fossen is a top-tier competitor in precision long range and team field-style matches. He dove into both 3-Gun and precision / long-range rifle in 2012 and credits his success to having good fundamentals of marksmanship and a firm understanding of external ballistics. In 2019, Fossen founded Fehu Outdoors and makes equipment and accessories to help other competitors with organization and gear storage/transport under this banner. Collin's background in engineering and project management, a lifestyle of outdoor adventuring, and his aggressively positive attitude has made him an excellent addition to the CD match director team.

Bruce is a competitive shooter and serves as CDâs medical consultant. At large events Bruce leads a team of doctors, Special Forces 18D medics, and EMTs to ensure competitor safety

Clay Parker is a retired US Army Sniper with experience in Central America, Asia, and the Balkans. He was an instructor at the US Army Sniper School in Ft. Benning GA, and he served as a Reserve Officer on the Bellingham Police Department, during which he helped train, the Bellingham SWAT team snipers.

Clay is an expert in implementation of broadband networks in inhospitable environments, as well as deploying complex applications in the "Cloud." His expertise enables CD to bring a near-"live match" experience to spectators at home as well as providing logistical and emergency communications support on-site for staff and competitors.

21 years US Army as a Sniper and Scout. Deployed all over the world in support of operations, and training foreign military personnel in Sniper and Surveillance operations. Matt Price is a web developer based on Fort Collins. He has been designing and creating web sites for over ten years and has held a lot of different jobs along the way: Environmental Engineer, IT Engineer, and Website Designer. He is currently the Vice President of Engineering at Community Funded and he architected their code base. Matt toured in a rock band for 6 years.

Matt is responsible for our web site design. He also does all of our T-shirt artwork.

Matt specializes in creating sites that are clean and easy to use. He can be reached at MatthewAPrice.com.

Matt is not a competitive shooter, but he is well versed in basic operation of most types of firearms. He particularly enjoys milsurp rifles and informal clay shooting.

Kyle Hill is a lifelong firearms enthusiast. He competes locally in both long range and 3 gun matches. An avid fly fisherman, however his day job is teaching high school science: AP Biology, Chemistry, and Exercise Science. 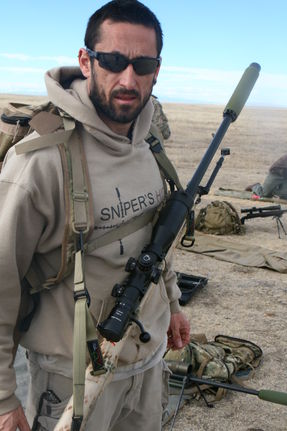 Ray has been a competitive athlete for most of his life. He went from earning a living playing racquetball, to racing triathlons and mountain bikes professionally. Ray has always been a gun guy, but about 20 years ago he decided he wanted to work in the firearms industry and spend more time shooting. Taking classes and learning from whomever he could, he quickly established himself as a very well rounded shooter and instructor along the Rocky Mountain Front Range. While competitive with a pistol or carbine, his favorite discipline is precision long range shooting and he spends most of his trigger time honing long-range skills. With wins at the Sporting Rifle Match and the Steel Safari in 2009 and 2011 he has proven himself to be a top Competitor in the sport.